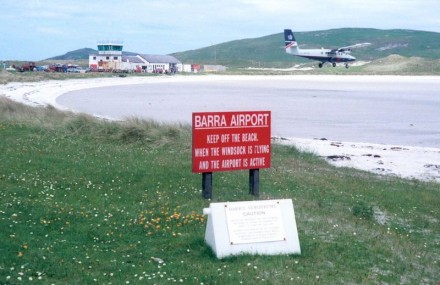 Barra Lufthavn på nordvestkysten af Barra Island med landingsbane og "lift of" af et Twin Otter fly på vej tilbage til Glasgow. Øen har kun ca. 2500 indbyggere og der er ikke megen erhvervsliv at servicere, så lufthavnen har nok ikke så mange kunder. Denne dag var der også kun 6 personer med inklusive mig, en lokal beboer og 4 englændere. Barra is home to one of the world's most spectacular and most beautiful airports. The wide shallow bay of Traigh Mhor, near Barra's northern tip, was famous primarily for its cockles until aircraft started to use the beach on 14 June 1933. Scheduled air services to and from Barra Airport began on 7 August 1936. Barra is now the only beach airport anywhere in the world to be used for scheduled airline services. De Havilland Twin Otters of Loganair connect Barra with Glasgow and with Benbecula. Details of the services to and from Barra can be found on Loganair's web site or on our Feature Page about the service. Traigh Mhor is so large, and the takeoff and landing runs of the Twin Otters are so short, that three runways are designated on the beach. This ensures that landings can almost always be made into wind. The ends of the runways are marked by posts that stay in place in the sand during the twice daily washing by the tide. Barra Airport is 116 nautical miles from Inverness, 140 nautical miles from Glasgow, and 75 nautical miles from the Scottish mainland. An average of 8500 passengers per year use the airport and there are more than 1400 aircraft movements (landings or takeoffs) per year. Flying into or out of Barra can seem a great adventure, but the airport is subject to the same safety rules as anywhere else. Facilities include modern emergency services, though the airport fire crews are called out far more frequently to help stranded dolphins or seals on Traigh Mhor than for any reason connected with the aircraft operations. This, too, must make the airport quite unique. If normal daylight flights seem exciting, remember that the airport can also be used for emergency flights at night or for operations by the helicopters of the Scottish Ambulance Service. For night flights, pilots rely on reflective strips laid on the surface of the beach, and vehicle headlights. Traigh Mhor remains popular with cockle collectors, who are advised to remain outside the marked runway areas. Visitors to the beach can tell if the airport is operating by checking to see if the windsock is flying. Barra Airport is small but well equipped. The control tower looks east over Traigh Mhor towards the nearby island of Orasaigh, and to Fuday and Eriskay in the distance. From the rear of the control tower it is possible to see over the dunes to the breakers of the Atlantic crashing in on the beach of Traigh Eais, three hundred yards to the west. The terminal building is welcoming and modern, and built to a nicely human scale. A visit to Barra Airport to see the aircraft arriving and departing is a fixture on most tours around Barra. But it is worth bearing in mind that there is a second reason to visit. The cafe in the airport terminal is excellent, and is certainly one of the best places in the northern half of Barra in which to fuel up during your exploration of this remarkable island. Barra Airport is operated by Highlands and Islands Airports Limited (HIAL), which in total operates 10 airports throughout the Highlands and Islands of Scotland. These form an arc including Campbeltown, Islay and Tiree, Barra, Benbecula and Stornoway in the Western Isles, Wick and Inverness on the mainland, Kirkwall in Orkney and Sumburgh in Shetland.