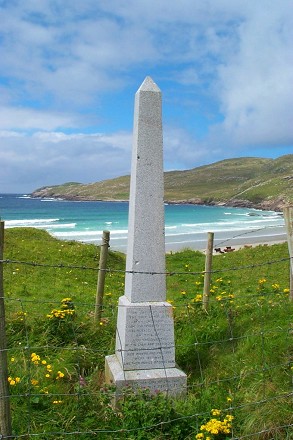 Farverne på Barra Island er så rene og smukke i klart vejr. Dybblå, blågrå, turkis, grønne og kridhvide/gullige farver dominerer synet alle vegne. Her ved vestkysten i bugten West Bay på Vatersay, strandede et stort skib "Annie Jane", under en storm den 28. september 1853. Over 350 mennesker på deres rejse som immigranter mod USA/Canada, druknede ved dette forlis. De ligger begravet på Vatersay og en mindesten, som her ses på fotoet, er rejst i klitterne ved bugten. ---- Her beretningen på engelsk: Annie Jane Memorial - the story Firstly the ship herself. She was launched in May 1853 in Quebec, Canada. She was a 3 masted sailing ship of 1294 registered tons. Her maiden voyage from Canada to England was uneventful, although the time from launching to first voyage is curiously long. There is a strong suggestion that she was very similar to the sailing ship "Dunbrody" a replica of which has been built at New Ross, Ireland. Click here to view the Dunbrody in a new window - www.dunbrody.com Now the first and last voyage of this fateful ship. She set sail from Liverpool to Quebec/Montreal in mid August 1853 but after a week turned back for major repairs to a lost mizenmast and several upper spars. She refitted and took on 6 extra able seamen but with over 100 less emigrants who disembarked at Liverpool, no doubt fearful after their first upsetting trip. She was loaded with just over 1110 tons of railway lines and had approx 450 passengers and crew on board. On the 15th Sept she was caught in a terrible gale and lost her mainmast and some upper spars from her mizzen and foremast. The Captain hove too and tried to remedy the situation with what timber he had for a jury rig. The ship drifted Northwards and on Wed 28th came in sight of Barra Head lighthouse. They tried in vain to get well to windward of the islands and then whilst trying to get through the Vatersay Sound between Vatersay and Barra the storm increased and the ship was forced into West Bay and the poop deck, containing many passengers, slid away from the ship. The rest of the ship broke up to matchwood within the space of 10 minutes, no doubt aided by the huge tonnage of railway lines. The body's of the dead and the living were washed ashore with some of the huge timber spars onto West Beach. In the end some 350 souls lost their lives, poor family's from Ireland in the main with some UK citizens as well. 102 were alive the following morning, 61steerage passengers and 33 sailors with 8 people from the 1st class Cabins. The memorial stands above West Beach as a reminder of this tragic event.