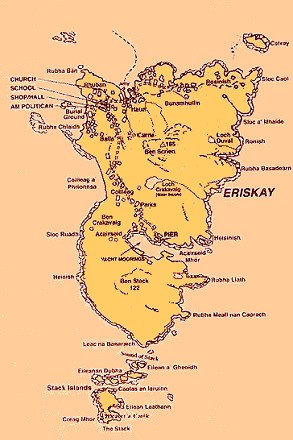 Eriskayøen. Eriskay - The Place The name Eirisgeidh is derived from the Norse for Eric's Isle. Many placenames on the Island and elsewhere on the Western Isles derive from Norse. This arises from the 400 years of Norse occupation (c800AD-c1200AD). The area where the car ferry used to berth is called Haun - haven - also derived from Norse. Eriskay is also referred to in Gaelic as Eilean na h-Oige, or Isle of Youth. Eriskay (Scottish Gaelic: Eiriosgaigh, from the Old Norse for 'Eric's Isle') is an island of the Outer Hebrides in northern Scotland. It lies between South Uist and Barra and is connected to South Uist by a causeway which was opened in 2001. In the same year Eriskay became the ferry terminal for travelling between South Uist and Barra. Despite its diminutive size, Eriskay has many claims to fame, that have made the island well-known far beyond its local Hebridean region. It is associated with the traditional Hebridean song, the Eriskay Love Lilt; with the Eriskay pony and the Eriskay jersey (made without any seams). It is the real Whisky Galore! island: it was just off Eriskay that the S.S. Politician ran aground in 1941 with its famous cargo. On August 2, 1745 the small frigate le Du Teillay landed Bonnie Prince Charlie with his "seven men of Moidart" on Eriskay to start the 'Forty-Five Jacobite Rising. An important early documentary film, Eriskay: A Poem of Remote Lives, made by a German traveller, Werner Kissling, was set on the island. There is a well-stocked shop in Eriskay, a community centre and the Politician Lounge Bar (named after the ship which serendipitously ran aground and famously provided the island with a generous supply of free whisky). The Roman Catholic church of St. Michael's sits on a hill overlooking the main village on Eriskay. It celebrated its centenary in 2003, having been built by Father Allan MacDonald in 1903. The site of the old church is marked by a memorial garden. Eriskay is traversed by a number of mountain paths and tracks, and has just a single motor road. The first stretch of that road was built in 1935, funded through proceeds from the first showing in London of the Werner Kissling film. Many Eriskay families have had to leave the island in recent years in search of work and some historic island families have few or no descendants left on the island. An example of these families is the Macinnnes' who were a prominent island family at the time of the Kissling film but are now down to just four members of the extended family dwelling on the island. Many of the people who have left have been young as there is no work for them on the island and no further education available either.