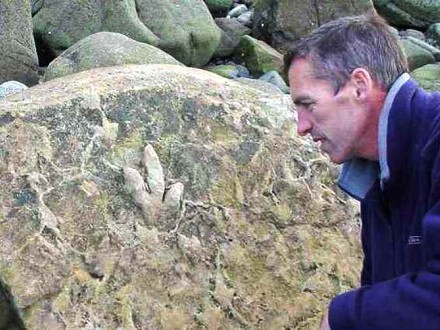 Lederen af museet og finderen Mr. Dugald Ross undersøger Dinosaur fodaftrykket i 2002. I området ses en Dinosaur families fodaftryk. ---- Her en beskrivelse på engelsk fra museet. ---- The prints were found on a slab of sandstone. A rare piece of evidence pointing to a dinosaur mothering her young after they had left the nest has been discovered on the Isle of Skye. ---- Some dinosaur footprints were found on a remote beach on the island reveal an adult ornithopod - a bipedal plant-eating dinosaur - walking along a muddy lake edge, with up to 10 smaller individuals. ---- The find on a slab of sandstone is thought to be a world first for palaeontologists. ---- The 170-million-year-old footprints were discovered by the isle's Staffin Museum curator, Dugald Ross, and hotelier Paul Booth last year. ---- It is only now that Dr Neil Clark, curator of palaeontology at the University of Glasgow's Hunterian Museum, has been able to confirm that the footprints were likely to be from the same species. ---- Clutches of eggs. ---- Dr Clark said: "It's extremely rare to find evidence of post-hatching parental care in dinosaurs. ---- "Most of the herding evidence comes from large Cretaceous sauropod dinosaur footprints in South Korea and the United States." ---- He said there was evidence that dinosaurs sat on clutches of eggs and after hatching would begin to move around as individuals. ---- An outline of the footprints. But he said the find on the Isle of Skye could turn "that theory on its head". ---- The footprints, measuring between six centimetres and 12 cm in length for the juveniles and 25 cm for the adult, suggest that the juveniles were probably less than one year old. ---- Early research into the footprints indicate that the animals were moving in the same direction and were found on the same bedding plane, providing a strong indication that they were moving as a family group. ---- Dr Clark said: "To my knowledge, there are no other examples of ornithopod prints showing juveniles and adults moving as a group like this. ---- "There is certainly evidence of juvenile ornithischian dinosaurs with adults from the same geological horizon, but not with such a clear relationship." ---- The original sandstone block containing the footprints is owned by the Staffin Museum on the Isle of Skye and is awaiting display after the research has been completed.