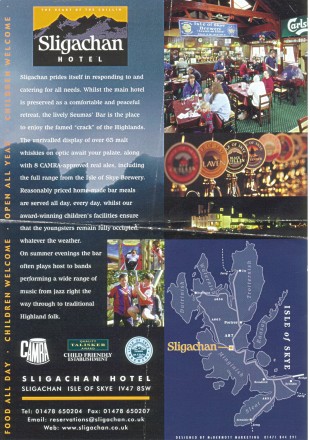 Her en brochure fra det berømte Sligachan Hotel. Her er ofte livemusik, mest skotsk folkemusik. Hotellet har en velforsynet bar og cafe med servering af lettere retter, foruden en dyrere restaurant. Man kan få morgenkomplet og mad hele dagen og aftenen. Hotellet er meget besøgt og her er altid liv. Mange kommer over fra campingpladsen og hygger sig om aftenen med at høre musik, danse og drikke øl og whisky. Baren her over 50 forskellige whiskyer. Lige noget for mig! Historien - på engelsk: A FAMILY TRADITION The original Sligachan Inn was situated half a mile from its present location.nearer the head of the Loch on the site of a natural ford, the name Sligachan (pronounced "Slig-a-han") is Gaelic for small shells, and so the spot became known as "the shelly place". Re-located around 1830, a new inn was built on the present site and swiftly became a mecca for gentlemen climbers who recognised the unique and challenging qualities of the Cuillin; and although extensive alterations and improvements have since been carried out, the buildings still retains much of the character of an old coaching inn. The Hotel has been owned by the Campbell family since the turn of the century. Mrs Fiona Campbell, her daughter Catriona and son Iain are all involved with the running of the family business. CLIMBERS, GUIDES & GURKHAS ! The land surrounding the Hotel is still completely unspoiled and remains much as it would have been in the 1800's, although fortunately access to Sligachan by road has improved greatly! The geological features around Sligachan are unique with the rounded Red Cuillin to one side, and the sharper peaks of the Black Cuillin to the other. Sligachan's popularity with climbers dates back to the late 1800's. Two of the most notable climbers to visit at that time were Norman Collie and Charles Pilkington. Collie came to Skye in 1886 and had two attempts to climb Sgurr nan Gillean, both of which failed, despite his climbing expertise. He then turned to a local guide, John MacKenzie, who showed Collie the easiest route to the top, which has now become known locally as "The Tourist Route". Collie was one of the first British climbers to show that the British mountains, and particularly , the Cuillin, offered some of the most exhilarating climbs, without the need to travel to the Alps or Rockies. He spent as much time as possible on Skye thereafter and particularly enjoyed his frequent stays at the Sligachan Hotel. John MacKenzie, born in 1856 at Sconser was the Cuillin's first and most famous guide and is believed to have climbed Sgur nan Gillean at the age of 10. A great friend of Norman Collie, MacKenzie spent fifty years showing thousands of climbers of varying ability the secrests of this wonderful mountain range. Charles Pilkington differed in that he learnt most of his mountaineering skills in Switzerland. As a consequence when he arrived in Skye on holiday in 1880, he assumed that these relatively small peaks would present little challenge. After a failed ascent of Sgurr nan Gillean, however, Pilkington developed a great love and respect for the Cuillin. He too spent a great deal of time on Skye, making successful first climbs of many peaks, with the assistance of John MacKenzie. Another notable event in Sligachan's history was the ascent of Glamaig by a visiting Gurkha soldier. Glamaig is the closest hill to the Hotel and is 2537 feet (775 m) high. In 1899, a Gurkha by the name of Thapa ran barefoot, from the Sligachan Hotel to the top of Glamaig, and back again, in 75 minutes. On being told of this feat, MacLeod of MacLeod, the landowner, refused to believe it, so the luckless Thapa was asked to perform once more. This time he completed the task in just 55 minutes. This time remained the official record until the 1980's. A race is now held each year in July and the record now stands at 44 minutes, 41 seconds, set by Mark Rigby in 1997. Another famous Sligachan guest was the popular Scottish entertainer Sir Harry Lauder, who was moved by his stay to write in the visitor's book : "The hills are bare & bonnie, the road is lang & steep, But the air is soft & balmy, Skye's the place to sleep!" Not the finest example of Scottish poetry!