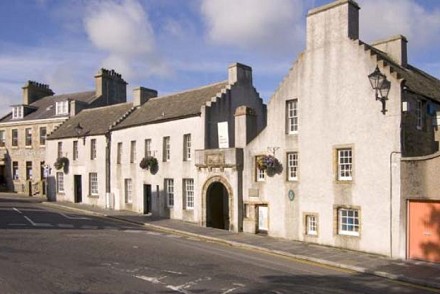 Kirkwall, The Orkney Museum. Tankerness House. Standing opposite the 12th century St. Magnus Cathedral, Orkney's principal museum is housed in the 16th century merchant laird's house known as Tankerness House. Displays tell the history of the islands over the past 5,000 years with exhibits of international importance from the Stone, Bronze and Iron ages. Within the museum visitors can view the Pictish Burrian symbol stone, St. Magnus reliquary from the Norse period and a variety of craft and trade items from the Middle Ages to the present day. Recently renewed Neolithic/Bronze Age galleries provide an excellent introduction to Orkney's outstanding ancient monuments and provide an insight into life in the Stone Age, from making clothes to building the massive tombs for the dead. The Bronze Age and Iron Age displays tell the story of a changing environment, and how the ancient Orcadians defended themselves by building brochs. As mentioned above, "The Picts" display contains one of the finest symbol stones ever found in Orkney - the Burrian Stone. "Life and Death in Viking Orkney" shows the rich grave goods found at Scar on Sanday, inclluding a beautiful whale bone plague cared with dragons' heads. "Medieval Orkney" looks at the building of St Magnus' Cathedral and on display is the wooden box that contained the bones of St Magnus after their discovery within one of the Cathedral's pillars. The rise of the merchant lairds in the 17th and18th centuries with their Jacobite sympathies and smuggling activities is also colourfully portrayed within the walls of the museum. The museum also hosts temporary exhibitions. About Tankerness House The current appearance of Tankerness House, the home of the Orkney Museum, dates from approximately 1574. The house started life as a Cathedral property. Its survival was due to the Cathedral's last archdeacon, Gilbert Foultie. As archdeacon, Foultie had occupied the house but at the reformation he managed to secure the building and thereafter make it his private dwelling. Later it became the town house of the Baikies of Tankerness, one of Orkney's principal land-owning families for more than three hundred years. The Baikie Drawing-room within the museum contains their furniture and paintings and the Baikie library illustrates the tastes of an island laird in the late eighteenth and early nineteenth centuries. The house has beautiful walled gardens with unlimited public access. The Orkney Museum - Tankerness House, Broad Street, Kirkwall, Orkney Telephone: (01856) 873191; Fax: (01856) 871560